skip to main | skip to sidebar

UN Workers Will Prevent US Attack

With US-Russia agreement and UN implementation of chemical weapons accord in Syria, UN inspectors and workers will essentially become a GOS held “blocking force” against future US attacks.  This was GOS strategic goal in entering into agreement.

Posted by Unknown at 3:47 PM No comments:

“GOING HOME TO THE SOUND OF THE GUNS.”

Posted by Unknown at 7:22 PM No comments: 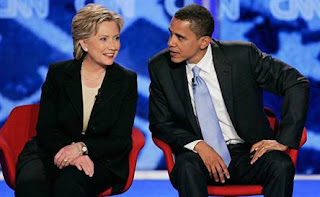 March 16. After a week of depressingly negative news out of the campaigns of the two Democratic candidates, the country is ready to hear exactly where a Democratic president would take us.

The inability of Senator Clinton to speak beyond the level of proposed policy details is driving her increasingly aggressive and partisan attack on Senator Obama. Obama is right in thinking that engaging Clinton in a "knife fight" would be a betrayal of his campaign's declared goal of turning the page toward post-partisan politics and a post-racial paradigm in America. Still, he too, needs to state his vision for the future of America more clearly. What we need and, I suspect, what the American People are demanding is a new vision for the future both in Washington and the world that we take the "War on Terror" off center stage and away from a policy driven by fear and insecurity.

One of the prime elements such a vision ought to include a restatement and subsequent reorientation of American foreign policy from the offensive use of military force to a more defensive, reactive posture in the "War on Terror." A new president should understand that political power does Not grow only out of the barrel of a gun. The conduct of international relations under the leadership of the United States in the Twenty First Century has got to be based on something more than military force. We can maintain our position as a representative of the principles of liberal democracy and market capitalism in the world by using all the instrutments of diplomacy and by working with our friends and allies.

Another element a new vision ought to include is to do all those things that will increase global markets for American business and products. Part of the solution to our economic future is the growth of international markets. This means we have to open the markets of every nation and region. It also means that we have to have policies that educate all our citizens and to greatly increase the efficiency of workers and managers engaged in international competition. In addition, it means that we have to construct and maintain the lines of communication and infrastructure necessary to move our products to global markets.

Lastly, an important element of a new vision ought to include a central role for the national scientific and technological enterprise. In my opinion, we should turn the majority of our energies into building America into that "shining city on the hill," so developed and advanced to be the very envy of the world. As a national goal and as a foreign policy, we ought to "reach for the stars, " focusing all of our resources (human, intellectual, technical, scientific, economic) towards the exploration of space, medicine, and advanced forms of energy. In order to do this, history demands a vision of peace with our neighbors and a behavior worthy of an advanced nation secure with its place in the world and its ability to move towards the stars.
Posted by Unknown at 1:22 AM No comments: